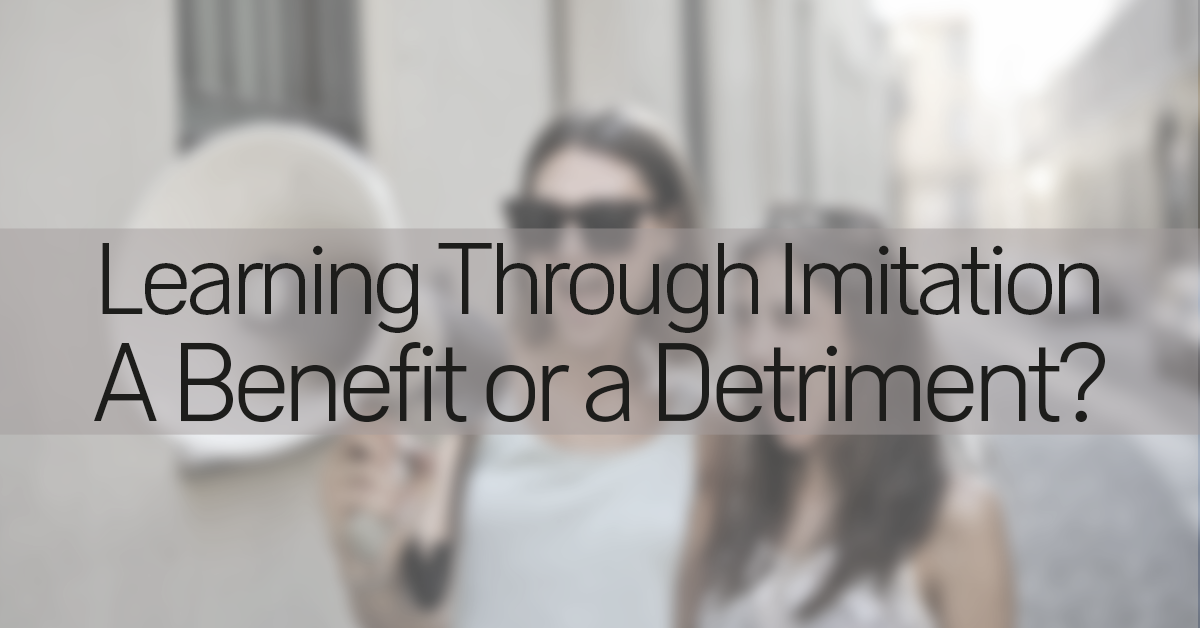 To some, imitation is the sincerest form of flattery. And to others it’s complete and utter dishonesty— perhaps even robbing one of their ‘true’ individuality. But speaking of such a thing begs the question: what is it that makes an individual their authentic self in the first place?

People are… complex. And even narrowing this question down to the topic of voice doesn’t make it any easier. Vocal anatomy plays a part, but how one uses said anatomy is the result of habits one develops throughout their life. Copying one’s guardians and peers is how the majority of people develop their ‘natural’ speaking voices. This, however, isn’t a process that ends in childhood.

Just as people are constantly learning and growing in every other aspect of their lives, vocal habits change alongside them. A study conducted on eleven members of the British Antarctic Survey team found that while spending extended journeys isolated together, the group’s phonetic patterns began to shift. And that is just one of many that have shown the true lability of the ‘natural’ voice. Whether it’s subconsciously imitating a partner in conversation or a conscious effort to curb linguistic profiling, it’s disingenuous to say a person only has one ‘true’ voice.

If one has ever had the misfortune of hearing the words ‘bio-essentialism’, they would be told that all of these aspects are innate. For the blissfully ignorant, biological essentialism is the belief that the qualities of a person are linked to their natural ‘essence’ rather than being a product of development (I saved you a risky click into TERF territory). ‘Essences’, which sound like video game collectibles, are supposedly what dictates one’s intelligence, creativity, and even femininity or masculinity.

The theory of evolution itself contradicts the notion that biological life is essential— modern taxonomy recognizes the vast variations that members of the same ilk can take. Which is ironic, too, since the essentialist position relies solely on genetic code being the answer to the age-old question of, “Who am I?”

That’s not to say that no part of a person is innate. While a person may be born with brown eyes or red hair though, there’s nothing to stop them from expressing themselves through contacts and dye. That is, unless they listen to the mantra of:

“Just be your natural self!”

‘Sticking to one’s roots’ can be empowering if done by choice, but also oppressive when it’s a concept forced onto someone. Returning to the topic of voice, maintaining one’s native dialect when moving to a new city may be a show of pride… assuming that one wouldn’t face discrimination based on said dialect.

It’s no surprise then as to why having a ‘passing voice’ (a voice that reflects one’s gender) plays a key role in the safety of transgender people. And as one trans participant in the 2019 study, “Your Picture Looks the Same as My Picture”: An Examination of Passing in Transgender Communities, wrote, “The hormones and surgeries and all the medical side of it, turns out that’s the easy part. The body language, speech patterns, mannerisms, the way you interact with people. That’s all the stuff that really takes the work.”

The journey to hormone replacement therapy and gender-affirming surgeries poses its own set of challenges. The issue is that the social side of things doesn’t always have a clear goal. As far as voice augmentation, how does one even begin?

Is it even possible?

Transmasculine people have the benefit of testosterone thickening the vocal folds (which has its own set of limitations as discussed in my previous article). But transfeminine people are left with the burden of learning a new manner of speech with no assistance from hormones. And, even if one considers laryngoplasty, there’s the cost of range loss or the vocal folds losing their ‘rubber band-like’ qualities.

Luckily for us in the trans community, we aren’t forced to live with a voice solely because it was the earliest one we developed. The same could be said of anyone. After all, actors and musicians would be regionally typecast without the ability to adapt to new roles. Take, for example, British actor Idris Elba, just one of many who has shown his acting prowess by taking on dialects authentic to Baltimore, South Africa, and even fantasy realms.

Imitating a voice to portray a character and imitating a voice as a means to practice and learn those habits are similar concepts. For some reason, the notion of the latter often leaves people shaking their heads and retorting with:

To understand what gives a person their ‘natural’ voice, it’s important to know how the voice works to begin with. To put it into the simplest terms possible, some of the major components (but not all) that affect one’s sound are: vocal fold compression, larynx height, tongue placement, epiglottal position, the openness of the velopharyngeal port, articulation, and prosody. Simple, right!?

Most of those features are performed without us truly realizing it. I mean, other than trained vocalists, who walks around thinking, “Gee, my larynx sure has been raised too highly today.” Without knowing that the answers were hiding inside one’s mouth and throat all along, why would anyone be forced to stick to a voice that they developed by sheer accident?

Hate that your voice sounds too nasally? Lifting or depressing the soft palate (velum) is what controls airflow to one’s nasal cavities. Want to speak crisp and clear? Being mindful of your articulation is your answer. And while these concepts themselves often seem impossible to visualize, when broken down, the pieces start to fall into place. That’s why imitation is our friend.

Imitation doesn’t have to mean, ‘copy it as exactly as possible to pass it off as your own.’ It can be a method of trying something that has features you want to emulate. You try it, start to understand it, and use that knowledge to develop ‘you’… whatever that means.

Text isn’t always the easiest way to describe the inner-workings of sound. For more information on how to actively control one’s speech, I recommend The New York Vocal Coaching’s Voice Breakdown series. While geared towards voice acting, once the concepts themselves have been ingrained, you already have the tools at your disposal to dissect the voices you love and mimic them.

It makes sense why augmenting one’s vocal techniques would be a key component of character acting and gender transition, but what of singing? Some hang onto the nagging fear:

“If you make a funny face, it’ll get stuck that way.”

But… does such a thing even apply to the voice?

On average, it can take anywhere between 18 and 254 days for a person to develop a habit according to the European Journal of Social Psychology. Consistent effort can and will become second nature if one puts in the time. And while that may seem potentially scary to a singer who doesn’t wish to lose the qualities of their natural instrument, imitation already exists under a different name such as in the puritan dogma of operatic pedagogy.

When teachers strive for their students to use chiaroscuro (a balance of dark and bright vocal textures) or squillo (twang and cord compression, especially in tenors), they are teaching an ‘industry standard’. And when the goal of many classical compositions is for the piece as a whole to shine through rather than the identities of the individual musicians, a systematic form of imitation is taking place. Style aside, the need to be heard unmiced over an orchestra creates another collective imitation where a singer’s 2-4 kHz and vowel formants are augmented to match harmonics for a spectral energy boost.

For other styles of music, such as pop where individuality is ideal, one may worry they are ‘losing’ the qualities innate to them and will only be ‘stuck’ in a neatly packaged box of factory-labeled singers. But in the same way an opera singer doesn’t speak with constant vibrato, the voice is capable of learning many habits to fit the needs of a situation. Take the genre of metal music for example pushing the bounds of harsh and clean singing performances.

But what of Fach, also known as one’s voice type (soprano, alto, tenor, bass, etc)? Vocal students are often taught that their voice fits into one immalleable category. If that were the case, where does transgender voice training fit in? Between the anatomical changes of trans masculine people on testosterone and the behavioral changes many undergo, an ‘alto’ or ‘bass’ isn’t entirely set in their range. By altering larynx position or vocal cord closure alone, the singing voice that one has always desired is no longer a distant daydream.

Mimicry is just one step of the journey. Just as people learn to speak in early childhood— taking in everything they hear and subconsciously piecing it together to create something unique —that process has no end date. Our ‘true self’ is a culmination of our entire journey. It’s taking how we are born, processing our experiences, and using that to make our own choices as individuals that leads us to… well, being us.

Sure, everyone may laugh now while I walk around doing a Solid Snake impression. But I’m in this for the long haul. Anything that gets me closer to my goal is what matters at the end of the day.

Thank you to @CowabungaCreate for the awesome artwork!

Harrington, Jonathan, et al. “Phonetic Change in an Antarctic Winter.” Scitation, Acoustical Society of America ASA, 1 Jan. 1970, asa.scitation.org/doi/full/10.1121/1.5130709. Rice, Patricia. “Linguistic Profiling: The Sound of Your Voice May Determine If You Get That Apartment or Not: The Source: Washington University in St. Louis.” The Source, 13 Jan. 2016, source.wustl.edu/2006/02/linguistic-profiling-the-sound-of-your-voice-may-determine-if-you-get-that-apartment-or-not/.