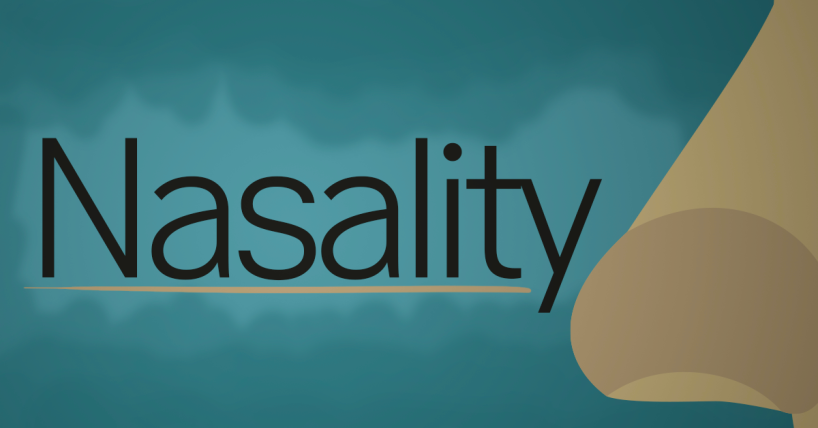 Nasality is the subjective interpretation of nasalance and is achieved by allowing airflow through the nasal cavity. A voiced sound can be classified according to its nasality as hyponasal, homeonasal or hypernasal.

From Anatomy and Physiology of the Velopharyngeal Mechanism:

At the level of the oropharynx, the outflowing air is able to escape through the oral cavity (that of the mouth) and/or through the nasal cavity. Your velopharyngeal port (VPP) is mostly responsible for determining how much of the outflowing air escapes through each cavity. Given that the oral and nasal cavities are morphologically (and in other aspects) different, they’re different filters, which will interact with the outflowing vibrating air in different ways, yielding different end sounds that were, however, both produced by the same source. These two different sounds can be isolated: the oral output sound by phonating with pinched nostrils and the nasal output sound by phonating with a closed mouth.

By controlling the degree of opening of the velopharyngeal port (VPP), you should be able to control the volume of air that flows through the nose, rather than through the mouth. However, this is not the full story. For example, if you’re experiencing nasal congestion or if you pinch your nostrils, your low (or even null) nasal airflow won’t be the result of a closed velopharyngeal port. Instead, there’s no airflow because the air isn’t allowed to escape through the nostrils, due to obstruction. In addition, among other factors, the position of the tongue may help redirect the airflow more in the direction of either cavity, influencing the relative airflow at the nose without affecting the degree of opening of the velopharyngeal port.

Nasality can be defined as the shared tonal quality of voiced sounds produced with nasal airflow. Depending on how pronounced this tonal quality is, each voiced sound can be further classified as hypernasal, homeonasal or hyponasal. It’s important, though, not to think of these classifications as discrete/distinct, but of nasality as a gradient that includes these classifications.

In addition, it’s also important to distinguish the cause of the hypernasality/hyponasality. One thing is to choose to be consistently hypernasal or hyponasal in your voice acting or singing (like Heather Headley, Marie Daulne of Zap Mama, Gwen Stefani, Yukimi Nagano of Little Dragon, Missy Elliott, Charli XCX and Patrick Stump of Fall Out Boy). Another thing altogether is to be hypernasal or hyponasal as a result of illness, allergies, turbinate hypertrophy, velopharyngeal dysfunctions (such as that of cleft palate) or other medical conditions.

Similarly, hypernasality can also be involuntary, but able to be behaviorally corrected, as is the case in the deaf. Because they’re usually only able to speak based on what they see or is taught to them (mouth shape and tongue positioning), the nuance of nasality isn’t something they’re usually made aware of. Therefore, their velum almost always remains in a default, lowered position, resulting in constant and heavy hypernasality.

On the other hand, in voice feminization, due to the effect of the larger nasal cavity of AMABs (assigned males at birth) on voiced sounds, it might be useful to eliminate nasalance in all vowels and consonants that don’t inherently require nasality.

So how do these concepts differ? They differ in that, while nasalance constitutes an objective, physical measurement, nasality constitutes the subjective dimension of nasalance. In other words, nasality is how we mentally interpret nasalance, depending on the vowel/consonant being pronounced, among other aspects. Why does it depend on the vowel/consonant? Because some are only distinguishable by their nasality. Additionally, the nasality of some vowels depends on which consonants surround them.

There’s plenty of exercises you can do in order to learn to control the velopharyngeal port.

When you walk past foul-smelling garbage, you might have a tendency to raise your velum and breathe only through the mouth, so as to not sense the smell. Knowing this, after imitating this scenario a couple of times, you should start being able to recognize movement of the velum..

One more tip is to use nasal phonemes, like /ŋ/ (as in hanger, spring, belong), in order to find the configuration for hypernasality, and really try to accentuate the nasal airflow. Pay attention to the sensation of the velum moving as you increase/decrease your nasality.

Once you’re able to, when practicing, confidently associate the opening of the velopharyngeal port with the degree of nasality, you should explore how your nasality and nasalance change as you go through your entire range. Be wary of uncontrolled hyponasality in belting and in the higher range of your falsetto/head voice (M2) and try to counteract it if you so wish.

A very important notion to keep in mind is that hyponasality and hypernasality are not necessarily problematic. They can be used for artistic effect. They’re not inherently “wrong”. A problem comes up only when you’re not able to control your nasality to sound how you want to sound.

Bunton, K., & Story, B. H. (2011). The relation of nasality and nasalance to nasal port area based on a computational model. The Cleft palate-craniofacial journal : official publication of the American Cleft Palate-Craniofacial Association, 49(6), 741-9.